The term “Cossack motorcycle” refers to all motorbikes manufactured in the former Soviet Union in the post-war period, as well as the brand “Satra Belarus”, which dealt with the distribution of them from 1973 to 1979. Ural and Dnepr were one of the former Soviet producers that were produced motorbikes abroad under the brand name “Cossack”. On the pages of our catalog, you can be accessed at different Dnepr motorcycles for sale. 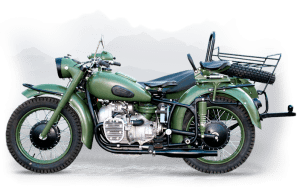 On our website, you can order “Cossack motorcycle” of the brand Dnepr, as well as high-quality spare parts for it. The motorbikes are completely restored and are waiting for their owner. Our qualified specialists guarantee that the renovated vehicle does not differ from the original one, and even surpasses its characteristics. In our wide range, there are both motorcycles with a stroller, or without. Also, you can get acquainted with different models that have different characteristics. The aesthetic appearance of the vehicle is remarkable and even with this characteristic the motorcycle significantly wins among the other, which were manufactured in the former Soviet Union. The main specialization of the company was the production of heavy motorbikes for the national economy.

Our specialists constantly improved the vehicle. As a result, the next revision of the popular K-650 model has got the improved technical characteristics, a three-wheeled vehicle obtained a completely new gearbox. The second modification – 12-volt electrical equipment. In general, for the period 1971-1976 were produced approximately 188 000 units of motorcycles. Even now, you can see the examples that have been perfectly preserved to our time. The most popular model of Soviet times was the “Dnepr-11”, the release of which began in 1985. This bike had the same four-stroke engine, the same drum brakes on each wheel, but was capable of a significant speed (105 km / h), as well as carrying capacity (260 kg). Model MT-16, which was produced in 1986, had an all-wheel-drive version and increased cross-country capability. Other advantages of the brand are:

The disadvantage lies in the fact that the Dnеpr motorcycles require special care and spare parts that are difficult to obtain sometimes, but with our help, this is no longer a problem. Here you can find all qualitative details for this motorbike, even the rarest ones. Contact us and get the information you need, become the owner of a qualitative fully renovated motorcycle. Our experts will recommend a model that will fully comply with your preferences.